Barry is a 47-year-old father of two, Matthew (21) and Jake (16).  He lives in Wilmington, DE and works for Advisen, Ltd.’s Kennett Square, PA office.  He is the Director of Technical Solution leading several global teams that develop, support and maintain Advisen’s solutions for the Risk and Insurance Communities. Besides keeping up with his son’s activities and triathlon training he is a passionate F1, Flyers and Drum Corps fan.

Why Barry became a triathlete:

For many years, he has enjoyed running and cycling.  In the different phases of his life he would concentrate on one discipline or the other. He is fan of triathlon racing from the Ironman World Championships to the ITU World Triathlon Series. Several years ago, on a two-week vacation to the Big Island of Hawaii he felt inspired during his morning run through the lava fields.  He thought to himself why not mix the two disciplines he enjoys and throw in the challenge swimming. From that point he has never looked back.

Nora Anne Mears Judd, Lifeguard & Swim Instructor, is from North East, Maryland. She started doing triathlons at age 15 when she began her desire to learn how to swim. She rode her bike to swim practice (16 miles round trip). She ran track each spring in high school. It wasn’t until her first year of college that she learned there was a sport that involved all three disciplines. However, she didn’t get to do her first Triathlon until she was 40. She has enjoyed the last 15 years and looking forward to many more years of triathlons!

Why Nora became a triathlete:

Your passion for triathlon and your willingness to share your knowledge and experience. Your focus as a competitor is awe inspiring!

I never thought I would work with a triathlon coach, I thought this was for professional triathletes. However, when heard about the coaching program offered by Vince through XMC I thought there was nothing to lose in trying it out and the cost was affordable. This was the best sporting decision I have made.

Why Shobha became a triathlete:

Prior to signing up for TRI coaching with Vince I had completed several triathlons from Sprint to Olympic distances. I coached myself, analyzed my workouts, put up a workout plan but doing all this was very stressful on me. I was constantly thinking about workouts and still doubted my potential on race day.

Using the experienced coaching by Vince has transformed my training and has made the sport an even more enjoyable experience. Since working with Vince I have been able to fit in a structured and consistent training program and I’m not over training. Vince is always reviewing the post-workout files and providing almost immediate feedback on training performance. Vince is very knowledgeable in this sport and I would recommend him to everyone.

My first Half Ironman race is in August in Maine, and I am looking forward to finishing the race under my targeted goal. 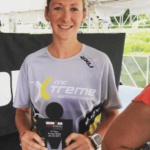 Super stoked for a 2nd place finish in my age group at Ohio Ironman 70.3. Quite literally couldn’t have done it without Vincenzo Marchione and Xtreme Multisport Coaching who has me running, riding and swimming better than ever. 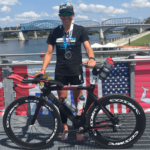 I was in the pool at a very young age. I took swimming lessons every summer growing up in Clearwater, FL. As I got a little older I did Pool Team over the summer in grade school and middle school. I swam all four years in high school as well as club swimming year-round. My senior year in high school, after the swim season I had to stop because I had developed chronic pain in my left shoulder. I did two rounds of physical therapy and finally got it cleared up after my freshman year in college. My sophomore year my friend invited me to a spin class at the gym. At the time I was running stadiums and going to the gym, so I thought no problem. I almost died! I hated her guts for taking me for a while, but me being the competitive person I am, I kept at it.

Why Michelle became a triathlete:

I joined the club cycling team my 4th year of college in 2012. I started racing Women B my first year and then Women A the following year. I had the opportunity to ride at collegiate nationals in May 2014 and placed in the top half of Women A out of 60-70 girls. I continued to ride and race after college while working for GE Aviation. In 2014 I tore my left ACL snow skiing while I was working for GE in Hooksett, NH. It impacted my biking. I lost half my strength in my left leg in one month. I went to PT for 2-3 months and got my strength back. Newark, DE was my next stop with GE. One of the guys I rode with found out that I was a swimmer and he suggested that I try doing a sprint triathlon. In the Summer 2015 I did my first sprint triathlon, I about died. It was a new challenge and I loved it! Since then I have been running, which is something I never thought I’d do. I hated running during dry land for swimming. But with time running grew on me. I have done two mega hike marathons and several Olympic distance triathlons.

My first half Ironman was at Lake Logan in August 2016. In 2017 I competed in Haines City, FL and Raleigh, NC. In late July I found out that I had qualified for the 2017 Ironman World Championships in Chattanooga because I was in the top percentage of my age group. After registering I knew I wanted to compete more seriously so I hired Vince to be my coach. At 2017 Ironman World Championships in Chattanooga I felt amazing, and I thank Vince for that. I am excited to see how I will improve next year!

“No bad things to say about Xtreme Multisport Coaching, they are top notch at every corner and truly take care of their customers.”
– Jeff Glum